Situated in the Spa Tower on the south side of the JW Marriott Las Vegas Resort, Hawthorn Grill features a rich bar area, perfect for an after-work or pre-dinner drink; a large, yet cozy dining room easily accommodating a large family dinner or a romantic date; and an expansive outdoor patio with a vibrant waterfall surrounded by lush foliage.

Type of Cuisine: A balance of American classics and Steakhouse fare 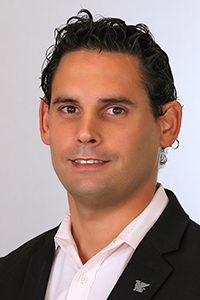 Greg joined the Hawthorn Grill team in August of 2019, bringing 15 years of upscale restaurant experience with him.  Most recently Greg oversaw the food and beverage department at Hotel Teatro in Denver, Colorado.  The downtown theater district hotel was home to The Nickel Restaurant, which was celebrated for its charcuterie, barrel-aged cocktail, and extensive wine-by-the-glass programs.  The Nickel is also one of the first restaurants in the country to offer CBD cocktails in its beverage program.

Prior to Hotel Teatro in Denver, Greg was the General Manager of Seafood R’evolution in Ridgeland Mississippi, a restaurant that featured an extensive wine list and the culinary creations of nationally acclaimed chefs, John Folse and Rick Tramonto.  Before moving to Mississippi, Greg was a Sommelier (aka cellar rat) at Restaurant R’evolution in New Orleans where he helped to cultivate and maintain a wine list of 1,800 selections and more than 10,000 bottles.

Greg began his career in the Vail/Beaver Creek area of Colorado, initially working in Vail but then moving to the Park Hyatt Beaver Creek, where he managed the 8100 Mountainside Bar and Grill for several years.  Greg has spent time in Louisiana, Colorado, Mississippi, and California.  Outside of the Hawthorn Grill, you can find Greg running across half-marathon finish lines across the country as he strives to complete his goal of completing a half-marathon in all 50 states. 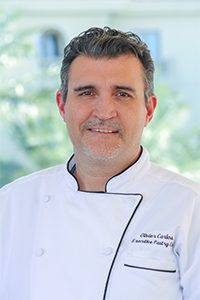 Chef Olivier Carlos grew up in Paris and at the age of 16 went to work in a kitchen as an apprentice cook. Despite the long hours, he quickly grew comfortable in the quiet and creative environment. After gaining his C.A.P in classical cooking in June of 1987, he began formal study of the pastry arts. From 1989 to 1991, he was an apprentice at Fauchon and explored different techniques in pastry arts. He then earned his C.A.P in pastry, the “Brevet de Maitrise Technologique” (master’s degree in pastry), and the “Artistic de Patisserie” (diploma in the art of pastry-making). He began working in a number of France’s most distinctive patisseries. In addition, he worked with Philippe Segond (MOF) for many years as Assistant Pastry Chef in Aix en province. In 1992, Chef Olivier earned 3rd place in the Coupe de France competition in France.

Aside from fulfilling his current duties at Hawthorn Grill, Chef Olivier is also teaching at the College of Southern Nevada’s Culinary Program. He does more than instruct his students in baking and creating exquisite sugar arts; he inspires them to such a great degree that the progression of their work is like that of a professional. Chef Olivier finds it very gratifying to create and design elaborate, unique desserts that bring smiles to the faces of his guests.